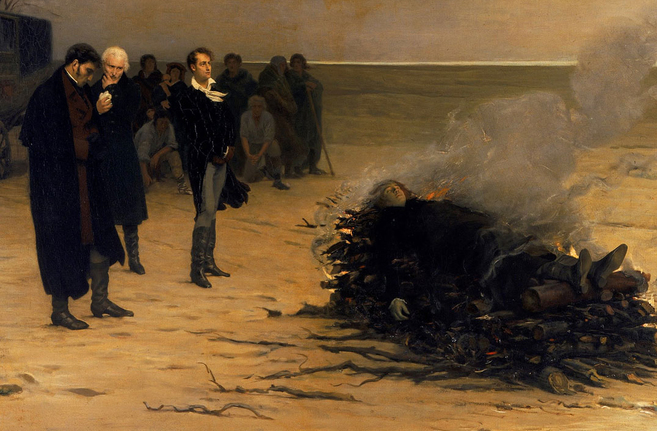 ​This time it's not so easy holding a pose,
shoulders back as he bends to gather driftwood,

build that final bed. All he can offer
is this pyre~ frankincense and salt

which turn the flames chameleon. Shelley's dead,
and two years from Greece, the marsh disease

which will kill him, Byron turns from the acrid smoke,
dusky medusa-curls circling his friend's face,

the hand which held his own one summer in Geneva
falling open as if offering something to the wind.

What else can he do but raise his head, a posture
of defiance which makes the others envious,

Hunt and Trelawny ashamed of their own small love.
Byron's thinking he must leave before he

thrusts his hand through the heat toward those
thin lips, dark with their secrets. He says he'll take

the skull for a goblet, swallow Death whole.
But for now he will swim. Pushing away from shore,

everything around him is cerulean~ water, sky,
roots of fire~ even the air looks blue, forgiving.

The bones of his foot seem to unfurl in the waves
making each kick harder, strong. Something feels

endless inside him. The midday August sun
scorches his arms as they rise and fall.

Out towards the Bolivar, his hands raining light,
Byron is burning, and he gives himself to the agony,

Its pure, rare bite like fire in his veins,
Until he's laughing, blisters rising cruel as moons.